Scary fact:  since the 80’s the diagnosis of depression has increased 400%.

The condition was a clinical anomaly at the beginning of the 20th century, and 100 years later 1 in 10 adults deal with the condition one way or another each passing year.

Of course a lot of this is due to the fact that increased awareness always leads to increased diagnosis…..but still!   Four. Hundred.  PERCENT!  That’s really……..depressing.

The telltale physiological sign of a depressed individual is reduced synthesis of the monoamines serotonin and dopamine but the number of underlying causes that can lead to this observation is pretty vast.  Your brain talks to the rest of your body pretty regularly, and problems in one area can lead to problems elsewhere.  Sh*t rolls downhill fast.

So if you’re feeling down in the dumps and want to pinpoint the root causes for your blues, here are four roads to travel down before poppin’ a Prozac.

Your thyroid is a little butterfly shaped gland in your neck that spits out hormones that regulate a whole bunch of things.  Not the least of which is your mood.   It’s been understood in medical circles for a longtime that depression and hypothyroidism [footnote]hypothyroidism is when you don’t make enough thyroid hormone[/footnote]  often go hand in hand.   In fact, a lot of mental disorders might be thinly disguised thyroid disorders. The arrow of causality is difficult to discern, but the connection between the two is indisputable.   Especially if you’re female.

Being hypothyroid has a whole host of side effects which include:

Since depression and hypothyroidism are tweedle dee & tweedle dum you’d think you’d automatically get your thyroid tested before going on an anti-depressant right?  Not so fast.

How to Test:  To test your thyroid you’ll more than likely have to go to your doctor’s office.   However, be aware that not all thyroid tests are created equal.  At a minimum you’ll want to make sure the following are tested for:

Many thyroid tests won’t cover all these bases.  TSH and T4 are the most commonly tested for, but simply looking at those can be misleading. [footnote]To be fair, they’re the most sensitive to thyroid problems, and thus the best places to start[/footnote]

T3 is the more biologically active thyroid hormone, and your body has to convert T4 into T3.  If you don’t do the conversion very well it’s entirely possible to have ‘normal’ T4 and TSH levels but deficient levels of T3.  You’ll feel like crap but everything on your bloodwork will look just fine.

“Free” T4 and T3 is the amount of hormone that is unbound to carrier proteins and can be taken up by cells for use.   It’s what you can actually use.

Reverse T3 is an inactive form of T3 that can’t be used for anything.  It’s hormonal junk.  In times of physiological stress your body has an increased tendency to convert T4 into this useless form of T3.

Therefore, your total T3 levels won’t tell you much if you don’t know how much of it is Free T3 and how much is Reverse T3.

A common cause of hypothyroidism are autoimmune disorders.  Sometimes your immune system will get stir-crazy and start chucking hand grenades at your thyroid gland.  That’s not good.  The most common type of this condition is called Hashimoto’s Thyroiditis.  Testing for thyroid antibodies allows you to see how much of your inactive thyroid is due to self-annihilation.

Again, it’s not a guarantee that these bases will be covered when you walk into your doctor’s office, so make sure you ask.

Further Reading:  Hypothyroid Mom seems to be the most popular site on the web for people with Thyroid Issues. 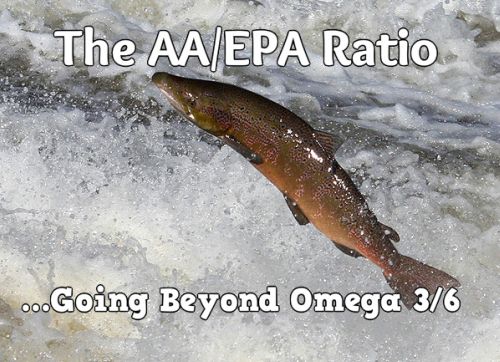 The connection between the omega 3/6 fatty acid ratio and mood disorders has been well documented, both at the population and clinical level.

However, what’s less understood is that there’s a ratio-within-the-ratio that’s probably more telling about your omega-health:  the arachidonic/eicosapentainoic acid ratio.

These are the two Omega’s that compete with one another in the body to make inflammatory compounds.   If you have too much arachidonic acid your body is pre-disposed to make a class of compound called an eicosanoid, which is used as a precursor for a variety of inflammatory responses within the body.  EPA plays musical chairs with arachidonic acid, blocking it from the eicosanoid pathway and keeping inflammation levels in check.

Most people have about 15 times as much omega-6 than omega-3, and the ratio of AA to EPA might be three times as bad. [footnote]The typical American has fairly high levels of circulating arachidonic acid and virtually non-existent circulating EPA.[/footnote] Probably worse in depressed people.

Where to Test:  You could probably go to an ND to get your AA/EPA ratio checked, but an inexpensive DIY option is the take home test from OmegaQuant.  At $45 it’s probably the most economical way to find out just how much you have to cut back on French fries.

Further Reading: I’ve yet to read better articles on omega-3 than what’s on the OmegaVia blog.  This article is a good place to start.

I’ve written before about the differences between folic acid and folate.  They’re close, but not quite the same.

For your body to use folate from the diet it has to be turned into something called 5-Methyltetrahydrofolate (5-MTHF for short).  To do this requires the enzyme methylenetetrahydrofolate Reductase (MTHFR).

If your body doesn’t make this enzyme properly you’re going to have a very difficult time in life.  MTHFR mutants have internal folate deficiencies that typical supplementation won’t fix and they’re more likely to suffer from a schmorgasborg of challenges:  breast cancer, heart attacks, high blood pressure, autism, epilepsy, and keeping your mood in check.

MTHFR mutants are 36% more likely to suffer from clinical depression, among other things.

Luckily, being a mutant isn’t a lifetime sentence of trips to the doctor’s office and suicidal tendencies.  You just have to supplement with 5-mthf.

How to Test Your MTHFR Genotype:  There are two ways to do this.  One scientific and precise, the other dirty and cheap.

If you want to know for sure you can order a DNA test kit from 23andMe and run the results through genetic genie and see what comes up.

If parting with $99 is too painful on the wallet you can start poppin’ Metafolin and see if you feel a difference.  If a veil of mental fog suddenly gets lifted and those internal cries to JUST MAKE LIFE STOP I CAN’T TAKE IT ANYMORE! That have been plaguing you your whole life curiously disappear you should also have your answer. [footnote]Be aware that Methylfolate isn’t a completely free lunch either.  This article explains why.[/footnote].

Further Reading:  Mthfr.net seems to be THE watering hole for all things MTHFR related.

Diabesities is a root cause of a lot of the maladies of modern life.  Fatigue, dementia, FUPPA’s, crankiness, naughtiness, dreariness, uppityness, snobbiness, tooth decay, body odor (seriously), malformed belly buttons, toenails that don’t grow out right, zits, tummy aches, and man-boobs can all take a turn for the worse if your blood-sugar levels are out of whack.  Among other things.

Should it be any surprise that insulin resistance and irregular blood sugar levels have an effect on your mood as well?

Clinically depressed people don’t clear glucose out of their blood very well, and being diabetic is a major risk factor for dealing with depression.  The American Diabetic Association has a good article explaining how this works.

There are a number of reasons why depression and blood sugar are linked, but two pieces of low hanging fruit are its effect on your internal levels of B vitamins and chromium.

Your body needs B vitamins to oxidize glucose into energy, and chromium in order to use insulin.  Lots of sugar and insulin sloshing through your veins is likely to create an impaired ability to use both of these, which are also used in other parts of your body……like your brain.

How to Test:  This is probably the easiest one to test for.  Doctor’s test blood sugar levels all day, so getting one done there won’t be a problem.  There are also a number of take home test kits that you can get at WalGreens or online.