Today kids, we’re going to have some fun with our LITTLE BUDDIES at Green Foods.  Makers of many fine powders.  Most of which look like shaved grass.   Not the least of which is their True Vitality Protein Shake.

It’s similar in scope to the products covered in our EPIC REVIEW of Amazing Grass, Vega One, and Garden of Life meal replacement powders.

In terms of its reach it’s not quite the behemoth those three are, but it still plays in the big boy sandbox.

What Might We Be A Wee Bit Concerned About?

With that being said, let us open our minds and discover the many intricate, hidden secrets lying beneath the lid.

It has a basic but solid ingredient list that touches on the major areas people look for in these sorts of things: protein, fiber/pre-biotics, probiotics, greens, and unlike any other brand that I know of……….it .also contains 1,000 mg of DHA, a very important nutrient that many vegans don’t get enough of.

These categories are fine, and the DHA is truly unique (and expensive), but their relative proportions might skew people towards one product or another.

With that being said….

For simplicity’s sake, I breakdown ingredient categories for meal replacement powders as follows:

Fibrous meal:  this includes prebiotics, most roots, fibers, long-chain starches, etc.  These are frequently marketed as being essential fibers, but they also serve other purposes: they have a non-invasive flavor, can easily take up mass, and are often good for giving products the right texture.

And to be perfectly honest, they’re usually not the most expensive ingredients either.  That never hurts.

These three will almost always comprise at least 90% of the mixture.  The last 10% are things like probiotics, herbs, and in the case of True Vitality, DHA.

However, it’s usually best NOT to treat this last 10% as all that important when discussing it as a % of the mixture.  Their value is best measured in other ways.

Here’s the chart for True Vitality:

What should stand out to you here is the large % of fibrous meal.  Specifically, one serving has 20,000 mg of brown rice solids and 5,682 mg of inulin (a pre-biotic that helps ferment your gut).

For comparison’s sake, here the breakdown for the Amazing Meal by Amazing Grass:

and for Vega One: 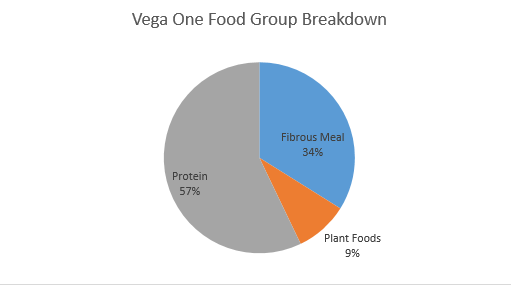 When it comes to the breakdown, beauty is somewhat in the eye of the beholder, but in my opinion the biggest drawback of True Vitality is that about 40% of the mixture comes from brown rice solids.  Not a “bad” or un-nutritious ingredient, but not the most potent either.  [footnote]Brown rice solids are the pulverized bran portion of the rice plant.  This would be like taking the “brown” part of brown rice (which contains a lot of the vitamins) and crushing it into a fine powder.[/footnote]

As this website points out, the best attributes for brown rice solids as an ingredient are how they affect the rest of the mixture.  Good for texture, solubility, etc.  It’s a food processing ingredient.

At the other end of the spectrum you have 500mg of greens, comprising a miniscule 1% of the mixture.   With that small of an amount you get the impression they put it in there so they could state that it had greens.  500mg of powdered greens is not that much. Their choice of greens is fine.  Spirulina, barley grass, and chlorella are pretty standard choices for these types of products and very nutritious.  But compared to similar products it’s definitely got the teensiest amount of the grassy stuff.

The label claims 8 billion CFU’s per serving.  In the ever expanding arms race to claim the absolute highest amount of good bacteria possible in their formula, 8 billion would put True Vitality at NUMERO UNO! compared to its peers.

So, let’s all gather in a circle and give a courteous, heart-felt golf clap for the fine gentlemen at Green Foods for going that extra mile.

It also comes with digestive enzymes, which aid in………digestion.  This can be especially useful for probiotics because they can reduce the damage done by digestive acids in the stomach, which usually shred them to pieces.

True Vitality has 1,000 mg of DHA.  This to me is by FAR the most interesting ingredient in the product.

LOTS AND LOTS of vegan products claim to contain large amounts of omega-3’s, but what’s less understood is that not all omega-3’s are created equal.

Flax, chia, walnuts, almonds, hemp and all that other stuff contain an omega-3 called alpha-linolenic acid (ALA).  It’s abundant in the plant kingdom.

However, the omega-3’s that do the most heavy lifting are EPA and DHA.  These are usually found in fish, and also in algae.  (True Vitality uses Life’s DHA, which is sourced from algae, which is how they can include it and still make the vegan claim on the label).

Its EPA and DHA that have a wide variety of uses in different tissues, reduce inflammation, and are the focal point of most of the health benefits associated with omega-3’s.  ALA isn’t as potent.

You know all that stuff about the omega-3/6 ratio?  It’s probably the arachidonic acid (an omega-6)/eicosapentanoic acid (omega-3) which really counts.  Those are the two that control inflammation within the body.

Your body can turn ALA into EPA and DHA but the process isn’t very efficient.  Maybe a 1-5% conversion rate, and it depends on the presence of other nutrients which are typically lacking in the vegan diet.  (I’m specifically talking about minerals in forms that are most often found in shellfish and other crustaceans).

I’ve written before that vegans might be wise to supplement with EPA and DHA.

Vin Cutty also has an excellent blog on the omega-3’s and how they work.

What I like most about the DHA in True Vitality are these two ever-so-important points:

If I Can Talk About the Sourcing For A Little Bit…..

About 6 months ago I scoured the world very hard for a good EPA powder.  I basically came up empty.  However, my journey allowed me to appreciate the difficulties in using fatty acids in big plastic tubs.

Fatty acids don’t want to be turned into powders.  They’re very sensitive to oxygen and spoil easily.  They’re also hard to make with a good yield.  The epa powders I looked at were usually about 10-15% EPA by weight and the rest was carrier.  [footnote]A carrier is a molecule you have to include in order to bind the main ingredient so it’ll stay stable at room temperature.[/footnote].

The EPA I looked at cost $180/kg from the manufacturer.

I doubt those numbers are exactly right because there’s no way you could have one ingredient for that amount…..but you get the idea.

It’s a premium ingredient, and one that’s desperately needed by many vegans.

True Vitality uses vitamin and mineral add-ins, which look like this:

Most of this is pretty standard fare, and I’ve written extensively about the best forms of the different vitamins here and here.

I’m a biochemist by training and hence very picky about what sorts of vitamins I think are best.  The vast majority of other people don’t seem to mind one bit.

My only nit to pick would be that they use the oxide forms of some of their minerals, which are usually too dense to be well absorbed.  They also use the amino acid chelate versions of others and I think they would’ve been wise to stick with those throughout the formula.

They also use sulfates and carbonates for the others, and this is not best.  You want to have minerals with at least two chemical bonds to its salts, so it won’t break apart too easily in the stomach and bind to something else (like phytate).  Carbonates and sulfates only form one bond, thus making them not as well absorbed.

The kind I tried was vanilla flavored.  It was very mild.  You could definitely taste the protein, and the flavoring added on top of it was very thin.

More than anything you get the impression that they deliberately wanted something that wouldn’t get in the way of whatever you mixed it into.

For most people that’ll be fine since it’s mildly sweet and dissolves very well and would go fine in a smoothie.  It doesn’t really have a rich flavor that’s savory when drunk on its own.

I thought it was fine mixed in water, but as my cabinmates have noted [footnote]Oh yeah, I live in the middle of the woods now…..more on that later.[/footnote], my tolerance for powdered supplements is unusually high.

I mix a greens powder with some carrot powder and cocoa in the morning and they joke how it looks like I’m drinking liquid shit for breakfast.

But the flavor is mild any way you slice it, so it’s easy to mask if it’s not for you.

In addition to it BIG HEAPING DOSE OF DHA, I thought the second best attribute of True Vitality was its price.

Most of the time “Vegan” is a synonym for “Expensive.”

The vegs have to pay a premium to get their food quick.

So with that said, being able to get this for under $20 on Amazon is a real coup.  If you compare it to other products like Shakeology, Amazing Meal, etc….it’s very affordable.

Whenever I analyze a supplement I try and ask myself “How were they trying to stand out?”

In this case it’s clear that True Vitality tries to make its mark with the combination of vegan + probiotics + DHA + inexpensive.

To do this they shaved out some of the greens content in the mixture.  I suppose if you’re okay with that, then so am I.

And that, my friends……is that.

So with that being said……..

I bid you a fond farewell!

Until the next time…… 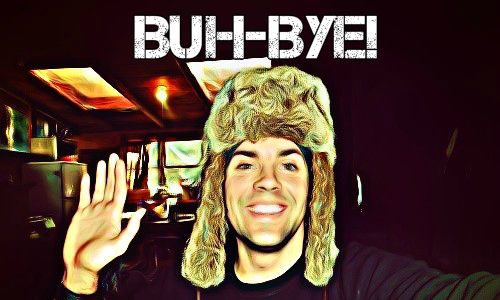