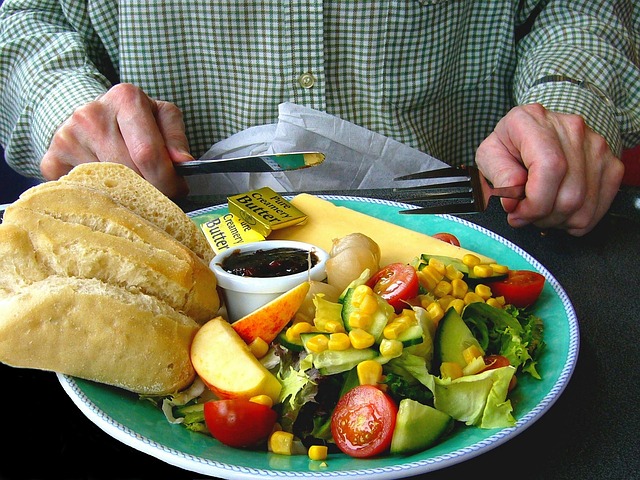 More and more our genetic variation plays a large role in shaping how we react to the food we eat.  If you’re eating something that comes out of a plastic bag (and we all do), chances are the supply chain to manufacture it stretches across the globe and re-uses different ingredients in ways we could never imagine.

Most people would be shocked to find out that the 100% orange juice you buy in stores actually uses pulp imported from china, juice from argentina, and stores batches of juice for up to 18 months to protect against seasonal variations.  Hardly from the grove to your glass!

We also have exposure to a much larger variety of ingredients than we ever have before.  When I went to the grocery store last week I could buy an eel salad, frozen calf liver, or goat milk yogurt.  And I just found out there are more than 96 different types of oreos.

For most of our heritage our relationships, meals, and food sources were all pretty local, so this messy business of worrying about whether or not we have an allele for the Apo E4 protein is pretty novel stuff.

But these things really do matter.  Just ask someone who discovered they had a gluten sensitivity and realized they didn’t have to spend their adult life with chronic indigestion and stomach cramps.  Or think about that friend you have who seems to eat whatever he wants but still doesn’t gain weight.  A lot of it’s in the genes.

A lot of this post builds on the last chapter of the excellent book Death by Food Pyramid (my review here), but I felt this topic is underappreciated enough that it warrants its own article.

So here are five ways small changes in your genes can have radical effects on what kinds of food you ought to eat.

1).  Your genes determine how well you transport cholesterol.   Contrary to popular opinion, VLDL, LDL, and HDL do not refer to different types of cholesterol, but different molecules that carry cholesterol throughout your body.  A high LDL (“bad”) cholesterol means they’re getting backed up in your bloodstream and cholesterol isn’t making its way into your tissues.

One of the most important determinants of how you metabolize cholesterol is a protein called Apolipoprotein E.  (APOE).  One of its many jobs is to bind to cholesterol and other fatty molecules and help them move elsewhere.  It turns out there’s one particular version of this protein (dubbed Apo E4), which has a very special preference for VLDL cholesterol in your body, and people who carry the e4 version of ApoE are much more likely to suffer from heart disease and alzheimers.

Carrying the e4 version of the ApoE protein does not mean you’re going to get heart disease, but it does mean that your body is pre-dispositioned to have higher cholesterol levels, thus increasing your chances.

People who carry this gene will not do as well on a low-carb, high fat diet as others.

2).  Your genes determine whether or not you can eat dairy.  Every mammal besides humans stops making the enzyme to digest the sugar in milk around the age of 2 or 3.  Curiously, many humans do not show this trait.  This is because our lactase gene co-evolved with the presence of livestock 10,000 years ago when we first began domesticating animals.

For this reason people of northern european, arabic, and african descent can make the lactase enzyme (the enzyme that helps you digest milk) throughout their adult life.

However, this is most definitely not true for people of every ancestry.  The following chart from this paper does a great job of illustrating how much your ability to digest dairy depends on your genetic lineage:

If you’re of northern european descent you’re 4x more likely to be homozygous for the gene that allows you to digest lactose!

3). Your genes determine your sensitivity to gluten.  About 1% of the population suffers from Celiac’s disease, a condition that prevents people from properly digesting their food due to a sensitivity to gluten.  I do not think gluten intolerance is as important as others, but there are at least some decent arguments that some sort of gluten sensitivity is more common than was previously believed.

Celiac’s disease and gluten sensitivity are largely determined by genetics, with the biggest risk factor being the expression of a certain haplotype for the protein HLA-DQ2.  People with this haplotype are much more likely to mis-identify the gliadin protein in gluten as an antigen in your intestine and initiate an immune response against it, mistakenly thinking your body is sick when it’s actually not.

Testing positive for HLA-DQ2 doesn’t mean you have celiac, since many non-celiac people express it as well, but 95% of celiac’s have this version of the protein.

4).  Your genes determine how well you digest carbohydrates.   For many people being a vegetarian means having starch as your primary source of calories.  It’s either that or textured soy meat.  Guys like Joel Fuhrman and Dr. McDougall especially espouse the benefits of being a “starchivore“, and I largely agree.  I’ve written before why some grains are a healthy diet choice.

However, your acceptance of starch into your diet should come with caveats.  People from starch eating parts of the world are twice as likely to have large amounts of amylase than people who aren’t.

In Death by Food Pyramid Denise Minger wrote about a very interesting study that examined the endocrine responses for people with different levels of amylase enzyme.

The results are fascinating.

People who produce a low amount of amylase are likely to have persistently higher blood sugar levels for two hours after eating starch than people who have high levels of amylase: 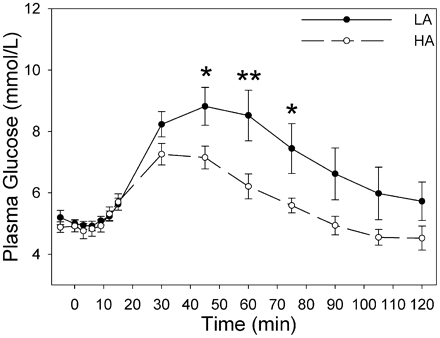 Chronically high blood sugar levels are one of the west’s hallmark signs of bad health.  It’s almost always a precursor to obesity and diabetes, and increases your risk of certain types of cancer.

In light of this information, it’s interesting (and maybe a little sad) to think how two people could read the same diet advice, eat the same amount of rice and potatoes for years, and one ends up healthy and thin and the other overweight and sickly.

People who express low amounts of amylase are likely to struggle with a high carb/low fat diet like those recommended by Dr. McDougall.

5).  Your genes determine how well you absorb vitamin A from your food.  Lots of people think vegetables like carrots and squash contain lots of vitamin A.  That’s not quite true.  They contain beta-carotene, which your body converts into vitamin A.

The vitamin A you get from your food comes in two flavors:  the plant kind and the animal kind.  The plant kinds are technically carotenoids, molecules that your body then turns into vitamin A.  The animal kind is closer to the real thing, and is best absorbed when eaten with fat.

Many people can get more than enough vitamin A from the carotenoids found in plants, but the conversion rate from one to the other varies a lot from person to person.  So it’s equally true that many people who think they’re getting enough are actually deficient.

In addition to your body’s natural carotenoid/vitamin A conversion rate, factors such as your weight, iron and zinc levels, and fat intake also mediate how much vitamin A you’re actually getting from plant sources.

People with low carotenoid to vitamin A conversion rates might struggle with a strictly plant based diet.

Besides the really obvious stuff nobody knows what you’re supposed to be eating.  Not in a time with 41 different flavors of Oreos and 86 varieties of toothpaste.

The knot is just a little too twisted.  The easiest approach is to eliminate the stuff you know is bad for you and work with what’s left.  Everyone starts off the same (junk food, soda, extra sugar, etc), but things get tricky when you get down to the level of individual variation.

A steak, bowl of rice, or piece of cheese really do mean different things to different people.

This article doesn’t contain nearly enough information to settle the question of whether or not these food groups are okay for you, (how do you test yourself for this kind of stuff anyway?), but hopefully it’ll give you the right frame of mind for evaluating food choices for yourself.