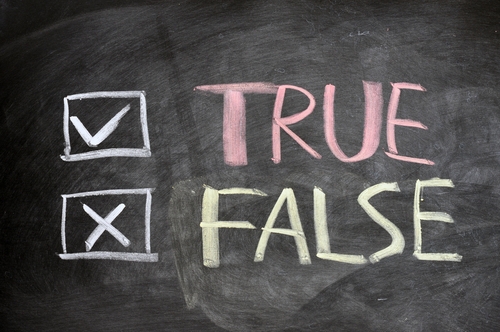 Unless you eat raw nuts, greens, and catch your own meat, eating healthy requires a bit of mental processing.  Foods are grown, treated, and packaged in increasingly novel ways that create the possibility that appearance might not be reality.

In the last 30 years we’ve seen concepts like the omega 3/6 fatty acid ratio, glycemic index, gluten intolerance, and the “primal” diet become embedded in the popular lexicon in ways that would’ve been inconceivable three to four decades ago.  A common denominator among all these issues is that a certain degree of separation from the food you eat creates a degree of uncertainty about what it contains, and whether or not it’ll have unwanted side effects for your body.

For most people becoming self-sufficient with food is not possible or desirable.  Mankind has struggled for thousands of years so it didn’t have to worry about how it was going to get enough calories to eat, so it makes no sense to try and undo thousands of years worth of progress.  But abundance comes with its own set of problems, and the largest is the sheer diversity of foods you have access to now that you didn’t have before.  Potential allergies, side effects, and autoimmune disorders that were previously latent in many people are brought to the surface due to increased exposure to almost all classes of ingredients.

The problem is that for many people, these problems are hard to predict beforehand, and difficult to diagnose after you get them.  With almost all health conditions there’s a large amount of possibilities to sift through before you can pin down exactly what it is that’s ailing you.  Practically every health threat will be true for some people some of the time.

So given the wide range of possibilities of problems you face, one of the most useful ways to make good decisions is to dismiss potential threats that simply aren’t true for anyone.  When faced with complexity elimination is a more powerful tool than affirmation.

So with that said, here are five chestnuts of health wisdom that simply don’t withstand the test of close scrutiny.

The concept of GMO’s arouses our instincts about purity.  Food and nature is inherently pure and a GMO organism represents an attempt to adulterate it for commercial interests.  This line of reasoning does not account for the following points:

Another good way to approach an issue that raises anxiety but is very opaque is to see if there’s an expert-layperson gap on the issue.  Economists regularly feel differently about economic issues than non-economists in predictable ways.  Ditto toxicologists, physicists, etc.  With the issue of GMO’s, 89% of life scientists consider them to be harmless, compared to just 45% of the general public.

Myth 2: You Should Eat Green Foods to “Alkalize” Your Body

Raw green foods do a lot of wonderful things for you, but their effect on your body’s alkalinity isn’t one of them.  The alkalinity craze seems credible because it anchors itself around a well established fact:  your body has a tightly monitored blood pH that’s just slightly basic, and if it goes out of this range things start to go awry.  That sounds great, but it completely neglects the other half of the high school chemistry lesson it draws on: the alkalinity or acidity of something is only useful when talked about it in the context of a buffer.

A buffer is something that keeps a solution within a certain pH range when exposed to other chemicals.  If a solution is heavily buffered, then adding either acid or base will have no effect on its pH whatsoever.  Every part of your body is buffered for the specific purpose of ensuring the initial pH of the substance you eat is rendered meaningless.  Your body deliberately makes your food acidic in your stomach and basic in your intestine so it can minimize potential toxicity.

To put into perspective just how dumb “alkalized” water is, consider this: water has almost no buffering capacity whatsoever, and so even a small drop of alkali is enough to make it basic.  The gastric acid in your stomach has about 100x as much acidic agents per million as the bottle of alkalized water you buy in the store.  To drink enough water to meaningfully change the pH of your body is beyond the level at which water itself would become toxic!

Myth 3: Soy Increases Your Risk of Cancer or Mimics Estrogen in Your Body

Soy has turned itself around 180 degrees since the beginning of the 90’s.  It went from a healthy staple of the Japanese diet to a hyper-processed food additive that’s now a public health pariah.  The truth is a little bit nuanced.  It’s true that large amounts of processed soy or soy by-products will not do good things for your health.  Sort of like how consuming over 100 lbs. of sugar a year might not be the best thing in the world for you, even if it’s the same sugar you can eat in fruit.

But soy in its lesser processed forms like tofu or tempeh is perfectly fine.  There are no meaningful links between these types of foods and cancer, and concerns over its ability to act like estrogen within the body and cause hormonal imbalance are very much exaggerated.  The estrogen mimicking compounds in soy are called phyto-estrogens, and affinity for estrogen receptors is about 1000x weaker than estrogen itself.  Phytoestrogens have also been shown to be cell protective, and is one of the reasons populations who have lived on soy for generations are generally healthy.

So don’t worry you’re not putting yourself at risk for hot flashes and premature lactation when you eat a veggie burger.

Myth 4: That “Natural” Sugar Is Better Than Other Sugar When Not Digested With Its “Natural” Food

If a sugar molecule has two or less units linked together its going to have the same physiological effect in your body regardless of its source.  High fructose corn syrup, table sugar, evaporated cane juice, brown rice syrup, fructose, and glucose all by and large do the same thing in your body.  It doesn’t matter if it came from beets or a factory.

The following graph compares the physiological differences between a naturally derived form of sucrose and high fructose corn syrup.  As you can see, the amount of insulin secreted is almost identical for both: 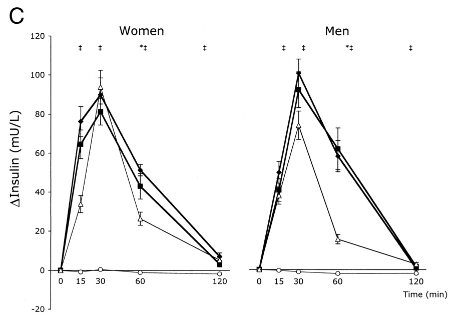 Myth 5: We Weren’t Meant to Eat Carbohydrates.  Ever.

It’s well established that excess sugar consumption is bad for you.  However, many dietary regimes like Atkins and paleo posit that all carbohydrates are bad for you.  I’ve written at length about why this isn’t true, but lets rehash the main points:

People definitely eat too much quickly digested carbohydrates, but I find little reason to eliminate all carbs from your diet.  In fact I do just the opposite.  I reckon I get about 50-60% of my daily calories from slow burning starch in the form of lentils, sweet potatoes, or beans, and it has none of the bad effects of the “white” kind you ought to avoid.  They help me feel full, give me long-lasting, even keeled energy, and I never get the same fat around my tummy after binging on starch the way I do after I binge on sweet foods.   (Hey, no one’s perfect……right?)

A common argument against carbohydrates is they were only eaten in large quantities until the dawn of agriculture and therefore our genomes aren’t equipped to eat them regularly.  This isn’t true.  Our ancient ancestors probably feasted on starch, and our ability to digest it is probably one of the reasons homo was able to expand out of Africa.   Humans make more copies of the amylase gene to digest starch, and early species of homo likely were able to use digging sticks to uncover the underground storage organs (starch) of plants, which gave them access to a robust source of calories other animals couldn’t take advantage of.

It’s well documented that hunter-gatherers have “fallback foods” that they use when times are tough and calories scarce.  The presence of fallback foods allows for higher risk food acquisition strategies like hunting, and allows the brain consistent access to the glucose it needs in order to survive under harsh conditions.  Starch is in our DNA.

Sometimes I feel sorry for some people when I hear them talk about their diet aspirations.  It’s clear all they really want to do is lose weight, feel better, and get off their expensive medications.  But in pursuit of their dream they overreach and fill up their head with lots of ideas they’ll probably wish they could forget.

Lots of other items you read about are at least partly true for some people.  But these five deserve to go into the ash heap of bad ideas.

1 thought on “Five Health Food Myths That Need to Die”