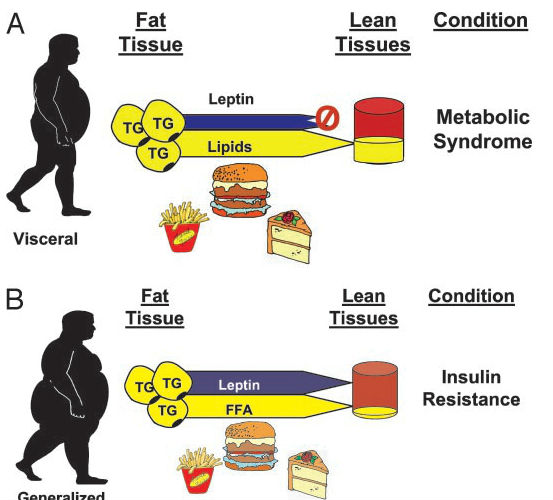 Fat Is More Complicated Than You Think

Not all fat is created equal.  Some of it lives just underneath your skin and serves the purpose you typically associate with fat: energy storage, thermal regulation, and very importantly……protecting the rest of your body from fat.

This type of fat is fairly harmless and often beneficial.  Mammals of all types accumulate it, and instinctively you don’t associate it with being unhealthy.  It’s why guys like girls that are curvy.  That’s the (mostly) harmless fat.

However, your body’s very particular about what it wants to do with fat.  It wants to keep it in fat cells.  Your other tissues have no idea what to do with it and when fat accumulates around them it’s basically a toxin.  Maybe even the toxin that’s most responsible for the metabolic disease clusters afflicting the developed world.

People who are severely overweight look gross because they have excess fat accumulating around their organs and non-adipose tissues.  Your heart, liver, pancreas, skeletal muscle, and kidney have no built in mechanisms for regulating it, and once it gets there it wreaks havoc, and can eventually destroy your organs.

It’s why people instinctively think six packs are healthy.   Most of your organs are stored  in your midsection and when you have a gut it means your body’s accumulated lots of excess organ fat (visceral fat) and it has nowhere else to go and begins to protrude outward.

To illustrate my point, here’s a picture of fatty and healthy organs:

Your body does not want to store fat on your organs and as such having a gut means your body’s regulatory stasis has slowly gotten out of whack and is in need of a severe  tune up.

It means your body is producing fatty acids faster than your fat cells can take them up.  It also means the receptors for hormonal regulators on your organs are either blocked or non-existant and your body is suffering from a mismatch between metabolic supply and demand.

And if it persists long enough it probably means your organs are undergoing accelerated death because fat cells are constantly secreting hormones that directly compete with other cell pathways that allow your lean cell tissues to function normally.  When fat gets on your lean tissues it stops looking like an inert energy depot and begins to look like its own sort of tumor that chokes off the energy supply of surrounding cells to fuel its own growth.

Why Your Organs Get Fat

Insulin is the broad regulator that makes your body want to store energy of all types.  It causes your muscles to turn glucose into glycogen instead of break it down.  It causes amino acids to be synthesized into proteins, and it causes your fat cells to take up fatty acids instead of oxidize them for energy.

Insulin is the metabolic tidal wave that’s either rising or subsiding in your body.  Sort of like the tides, except its levels are dictated by when and what you eat instead of the moon.  However, the precise protective mechanism that causes your fat to go into your fat cells instead of your muscle tissue is primarily controlled by another hormone called Leptin.

Leptin is secreted by your fat cells after a meal and once it tacks itself onto your other organs it activates a molecule called STAT-3 that migrates into the nucleus of your cells and turns a bunch of genes on and off so they have no proclivity to make or store fat so your adipose tissue can swallow it all up.

Over time your cells become leptin resistant, either due to a lack of receptors or decreased leptin secretion by normal fat cells obecause the fat on your organs has turned off other regulatory inhibitors that would impede their growth.

Fat on your organs is very self-perpetuating and will continue its growth phase until something stops it.  This is problematic because your fat cells have almost no upper bound on how much fat they want to store and the feedback loop will continue unabated until your body’s physiological environment changes.  And change ain’t always easy.

Leptin is a newly discovered hormone, and it’s quickly gained traction as one of the most important body composition regulators alongside insulin.  It’s also poorly understood.  But its fingerprints are everywhere in all sorts of conditions that are creating a gigantic sucking sound on the quality of people’s lives.

Given its importance, you might think consuming leptin orally with a supplement would be a good idea, but sadly this is not so.  For one…..no one’s quite sure exactly how it does what it does.  And secondly its effect depends just as much on how its used as the overall levels circulating in your blood.  For a while it was thought that giving people a bunch of leptin would help reduce obesity since it reduces hunger and keeps cellular fat tucked away in its right place.

But they quickly found out that skinny people can be leptin resistant too, and leptin resistance has just as much to do with the expression of leptin receptors on your organ cells as it does with the absolute levels of leptin themselves. So for the most part, leptin supplements aren’t a smart buy.

6 thoughts on “The Fat You Eat and the Fat You Wear: Why So Many People Look Disgusting”