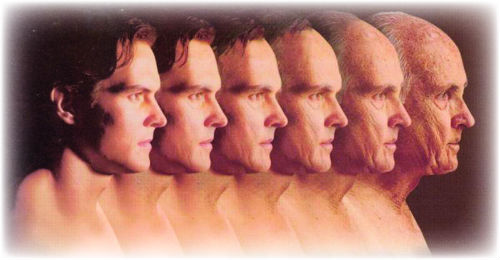 The science of aging is fascinating, to put it mildly.  Usually the best way to understand complex systems is to put stress on their different components until they break.  Only this way can you differentiate inputs that would otherwise be indistinguishable.  By looking at how centenarians are different than the rest of the population we can peek into the fringes of our metabolic systems that make our bodies tick.

Aging: NOT A Linear Process

Your body’s rate of decay is not a metronome. Not in the slightest.  It’s regularly taking cues from its environment (the biggest of which is the food it eats), and based on this information expresses genes that’ll enhance its evolutionary fitness.  And a large part of evolutionary fitness is knowing when you need to die.

From a metabolic standpoint, you can think of your body switching between two different states: a preservation state and reproductive state.

In a preservation state your body makes investments in metabolically expensive molecules that are great at fighting off exogenous stress, based on the presumption that you might have some genes worth passing on.

In a reproductive state your metabolic systems are much more loosy-goosey, and your body intuits that you’ve blown your genetic wad.  And if that’s the case…..then the show’s over.  It’s time to get out of dodge.  Your body will begin eliciting a variety of hormones that’ll program itself to shut off.

The difference between these different metabolic states is primarily regulated through the release of insulin and its little cousin, Insulin Like Growth Factor (IGF).  They work together with other hormones to modulate your endocrine system that makes your body want to shut itself off!

Changing the way your body secretes and responds to insulin is the equivalent of giving your body a fast-forward and rewind button on its own lifespan.

The role of Insulin/IGF-1 in controlling aging is a very well conserved process and examples of its robustness abound in the animal kingdom.  Consider the following examples:

These results are interesting but you might be thinking, “But What About Humans?”

We can’t do knock out studies on them, but studying centenarians paints a familiar picture.  For example, a common denominator among centenarians is that they have plasma glucose and insulin sensitivities that are comparable to the typical adult half their age.  These are the same biomarkers which strongly predict intermediaries on the way to death, like atherosclerosis, hypertension, and obesity.

Genome sequencing has shown that centenarians frequently have unique polymorphisms for genes that help control insulin secretion.  It appears at the end of life these people begin to express their genetic superiority that allows their body to resist the insulin induced shutdown that afflicts their shorter-lived peers.

I’ve written before about the ability of caloric restriction to extend life and improve well being.  Some of the benefits of caloric restriction simply come from the lack of calories themselves, but a large portion of its benefits likely have to do with the reduced insulin secretion that results from the lack of simple carbohydrate in the diet.  This is likely true of successful dieters from all corners of the healthy eating paradigm (veganism, macrobiotic, paleo, etc).  When followed appropriately they all converge towards an eating regimen that,  in addition to being nutrient dense, promotes a hormonal balance that makes your body want to keep itself alive.

So if you’re reading this and you’re thinking “so what should I eat?”, the implicit advice from this article can be boiled down to one simple instruction:

Reduce the amount of sugar and flour in your diet.

They quickly assimilate to glucose in your blood, which triggers the secretion of insulin, which starts the aging/obesity/cancer cascade.

Franceschi, C, et. al. “Genes involved in immune response/inflammation, IGF1/insulin pathway and response to oxidative stress play a major role in the genetics of human longevity: the lesson of centenarians.”

1 thought on “Eating For Longevity: The Bottom Line Among People Who Live A Long Time”