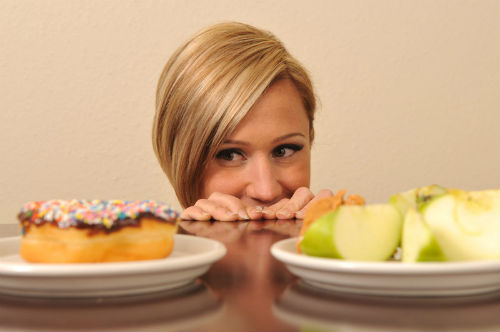 The prevalence of obesity is forcing many of us to scrutinize why our bodies act the way they do.  This is hard because our bodies are complex systems and humans have a strong tendency to think in straight lines.

For the same reasons we can’t beat the stock market or predict the weather, we find ourselves scratching our heads about how to stop our bulging waist line.

The end game for all weight loss is a familiar one: calories in must be less than calories out, but that’s a woefully simplistic way to approach the issue.

For example studies have been done on rats that demonstrate diets with the same caloric content and identical nutritional density can produce very different results in weight gained/loss by altering the physical characteristics of the food eaten.

Why Do We Get Hungry?

Most of us struggle with eating too many calories.

But that begs the question: why are we always so damn hungry?

The occurrence of hunger can’t be solely influenced by the amount of calories  we eat.  The average american eats about 3300 calories a day, which is actually more than the typical Kenyan olympic runner!

The Okinawans have the highest proportion of centenarians in the world, but eat only about 1200 calories a day.  I doubt they have they have herculean willpower that allows them to resist late night cravings for 100 some odd years.

No,  their are regulatory mechanisms within the body that have gone awry which convince our bodies that it needs more calories than we actually end up burning, which makes us fat.

Your Body Has A “Set Point”

The most convincing argument about why we crave foods the way we do is that your body takes in different cues from its environment and calculates a “set point” for the amount of body fat that it thinks it needs to store.

The higher this set point is, the more the body will induce hunger to get the food that it needs to satisfy this requirement.

If this set point is sufficiently high and the amount of food that you eat is below it your body will induce cravings and feelings of pleasure from food that will make you want to eat more.

If your set point is low and the amount of fat you’ve eaten is above it your body will actually stop wanting food (hard to believe, I know).

Your body incorporates lots of signals when determining the amount of fat it thinks it needs to store, but the close association of calories and pleasant flavors is perhaps the most important.

Your body naturally likes things that are fat and sweet because they contain lots of energy. And if your body begins to associate palatable flavor sensations with lots of caloric energy in your diet then it assumes energy is cheap and begins to store lots of it.

In a sense the interplay between calories and flavor acts as a predictions market your body uses to make bets on how much energy (fat) it ought to store.  When food is abundant you’ll naturally eat more savory foods than usual.  Since energy is fairly cheap your body thinks it ought to store more of it, and raises its set point.

This phenomenon also has an inverse:  calories without flavor typically signal times of famine.  Storing energy has costs, and if energy is expensive then your body is prone to store less of it…..which lowers the amount of fat it carries.

So your body learns from the foods you eat how much fat it thinks it needs. Here are some important points to consider:

Why You Get Food Cravings

Given the above information, it’s easy to reason why industrialized food and the western diet causes so much weight gain and always leaves you feeling so damn hungry.

Things like fast food and Dorito’s have very intense flavor sensations, are very high in calories, and are low in fiber and thus digested very quickly, intensifying the positive flavor/calorie association in the brain.

Furthermore the uniformity of processed food allows for a consistent relationship between taste and caloric intake, which deepends the “learning” your brain does for the food it eats.

If you make it a consistent part of your diet then you’re training your body to think it’s shopping for calories at a buy one get one free clearance sale….and it’s stocking up on all that it can.

How To Be Less Hungry

If a diet that strongly couples flavors and calories causes your body be hungry and store fat, then a diet that decouples the two signals should do the exact opposite.

This is an important point.  You can condition your body to be less hungry by changing the way you eat.

What’s unique about this observation is that given the above information you can do this independent of the nutrients in your diet.

Here are the take home points:

I want to take about the first point.

From the information given here, it stands to reason that consistently digesting flavorless calories can lower the amount of food your body thinks it needs, thus making you less hungry.

Well, guess what? A professor at Cal Berkeley named Seth Roberts arrived at this conclusion after evaluating hunger research and tried this exact trick on himself.  He lost 40 pounds and later published a book about his findings called the Shangri-La diet.  Most of the research I used for this post was borrowed from him.

He gets all the credit.

There are usually two ways to digest flavorless calories:

It also stands to reason that you should consume your flavorless calories separate from other meals and all other flavor sensations.  Meals, tooth brushing, etc.

The standard rule in the Shangri-La diet is that your flavorless calories ought to come at least one hour before and after you have any other flavor sensations.

I tried this myself and found that it works remarkably well.

I carried a small bottle of oil with me for two weeks and found that my food consumption went down so much that I had to stop because I didn’t have the energy to play any sports.

Pavlov was the guy who discovered that if you ring a bell right before dinner time eventually the bell all by itself will cause dogs to salivate after a while.

Our appetite basically works the same way.  If you consistently expose yourself to a particular flavor that’s consistently followed by a specific caloric intake then the flavor itself will begin to evoke certain physiological changes in your body.

So if you mess with this correlation then the psychobiology of your appetite can change considerably.

This is a poweful piece of information.

It turns out there are a few simple steps you can take to curb hunger and caloric intake and the huuuuuge windfall that results from too much of either of those.

The world needs to find out about this.

Who knew trillions of dollars of healthcare spending could be cut out with a few tablespoons of oil?