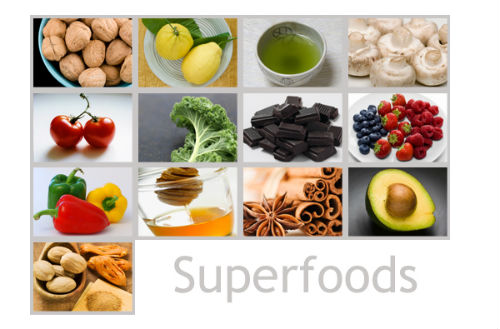 The term ‘superfood’ is occupying a growing niche in popular vernacular.

Since then it’s been extended to more pedestrian foods as long as they serve some sort of medicinal or health function.   Help lower blood sugar, remove toxins from the body, etc.

If you combine these two definitions a “superfood” is any natural substance that has a real or purported health benefit.

So a superfood has basically become a synonym for health food, but with a little more ambiguity.

It actually seems a little silly to me, but whatever.  If it creates the mood necessary to adopt a wholesome diet, then so be it.  Superfoods it is.

However it’s important not to get carried away.  I’m a firm believer in the healing powers of good nutrition, but people can get misled by their sense of affiliation.

Sometimes the term “superfood” can get slapped onto something merely because it’s unfamiliar and is grown far away, not necessarily because it’s good for you.

Here are four foods in particular that don’t stand up to the hype.

Why are they overrated?

Because their perception is flawed in at least one of the following ways:

So think twice before you fork over some hard earned cash for these dressed up pigs.

Also known as shavegrass, horsetail belongs to the plant genus Equisetum, a pre-historic family of trees that reproduce by spores.

You don’t see it sold on its own very much, but you’ll occasionally see it listed as a part of other mixtures.

It has a reputation as a diuretic and therefore as a remedy for ailments having to do with improper fluid balance: kidney stones, gout, arthritis, etc.

However, there’s not a single scientific study verifying any of these claims. None!  The only thing I could find is one paper that broke down its mineral composition, which suggested it might have a few anti-oxidative and anti-inflammatory properties to it.

That’s pretty darn thin. Practically anything that’s green has to have a few compounds that oxidize the body.

A useful resource for looking into the verifiable benefits of different foods is the  Natural Medicines Comprehensive Database.  It collects the available research on different herbs and foods and decides if there’s enough evidence to declare it useful, useless, or harmful for different conditions.

Well guess what?  Its stance on horsetail is that there’s not enough evidence to suggest it does anything at all.

The only thing we really know for sure about it is that it’s a diuretic.  That’s nice, but parsley’s also a diuretic.  So is coffee.  You can buy a bunch of parsley at the grocery store for $0.99.

Himalayan pink salt is salt that’s harvested from the Khewra salt mine in Pakistan (pictured below).  It’s one of the oldest mines in the world, and the soil there has a unique mineral composition which gives the salt a pinkish color and   a few additional trace elements not found in the iodized salt you can buy in the store.

When judging the health benefits of himalayan pink salt, there are three crucial considerations to keep in mind:

But isn’t is unprocessed? Doesn’t that make it better?

But what about the trace minerals in himalayan pink salt?

The differences in chemical composition between different salts isn’t that big.  98-99% of all salt is sodium chloride, which the western world has a problem with. So any discussions about the unique health benefits of himalayan pink salt has to do with the remaining 1-2%.

Pakistani chemists have analyzed the chemical composition of the different salts from the khewra salt mines and the following is what they found:

If you don’t like crunching numbers I’ll do the hard work for you:

Extrapolating from those numbers, if you get your daily recommended allowance of salt entirely as himalayan pink salt then you’ll get 1.2 micrograms combined of the different minerals contained in himalayan salt.  That’s literally about one speck of dust.

A pound of himalayan pink salt costs about $10.  You can get a pound of table salt for about $1.

If you want to use himalayan salt as a garnish then that’s fine.  But it hardly qualifies as a superfood.  Here’s another good article explaining this in more detail.

Elk antler velvet began to garner a lot of attention after Rick Rolle wrote about it on the blog of Tim Ferriss.  Elk Antler Velvet is the cartilagenous material found in antlers, and also includes the fuzz that shows up on the outside.

Elk antlers grow very quickly and contain lots of growth hormones and proteins that stimulate testosterone production and a variety of other hormonal changes.

It’s use in the supplement industry has sprang up recently, and it’s very expensive. 1 oz of concentrated elk antler extract costs $150.

Elk antler velvet certainly scores points for novelty, and it probably does have a variety of unique nutrients.

However, nobody’s quite sure what they are yet.

I’m actually all for medicinal experimentation and formal studies aren’t the end all-be all of articulated wisdom on a subject.

In fact I’d be willing to bet that elk antler velvet is in fact a superfood….but right now it’s hard to say.

So as you can see, there’s quite a disparity between it and some of the more documented superfoods out there.

From what I can find there are three studies done on humans with regards to elk antler velvet.  From them here are the three take home points:

Let me re-iterate that:  No study has found a positive correlation between elk antler and its purported health benefits in humans.  And there’s hardly any research that’s been done at all on the substance as a whole.
Given its high price and lack of surrounding evidence, I reckon the amateur herbologist is well suited to look elsewhere for his daily dose of superfoods.

From what I’ve read the most notable aspect of Klamath algae is its unusually high concentration of a type of molecule called  phycocyanin, which is also present in spirulina and chlorella but to a much smaller degree.

Like elk antler velvet there’s very good reason to believe that it does have some remarkable health benefits but little formal studies to validate our intuitions.

The best you can say is that it’s similar to spirulina and chlorella and we both know those two fresh water algaes are extremely nutritious and worthy of the term “superfood.”

Of course, that brings me to my next point.  Even though it’s similar to spirulina, it’s much more expensive.

For example on iherb 130 capsules of spirulina costs $15.   A similar amount of Klamath Lake algae costs $28.

And of course the health benefits of spirulina are well documented, and we don’t have to worry about any of that potential toxicity stuff.

If you’d like to read a particularly damning opinion of Klamath Lake algae and the people who sell it, here’s a good piece.

Not All Superfoods Are Equal

In my opinion Klamath algae and Elk antler are very interesting, but don’t pass a cost/benefit test.  The claims about himalayan salt border on rubbish.

When discussing superfoods it’s important to remember that they don’t need to be exotic in order to be effective.  A bag of kale costs $4.  Cocoa powder is the most powerful antioxidant in your kitchen, and ginger has been used to treat sickness for centuries.

Some of my favorite homemade remedies (like the superfood cough syrup) are made with ingredients that are in most people’s kitchens.

So eat your superfoods, but don’t go broke doing it.

8 thoughts on “Growing Weary of Superfoods? 4 Plants That Don’t Deserve The Name”