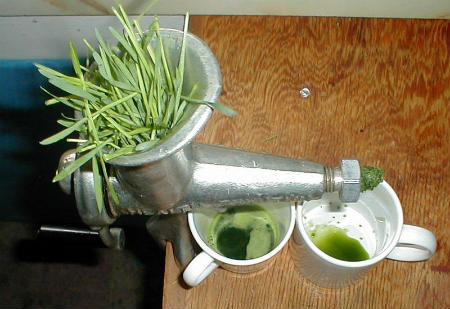 Wheatgrass is the little weed that could.

It’s just the grass that sprouts up from the wheat plant, one of the most common commerical crops in the world.  Grass is all around us, so you wouldn’t think such an innocuous shrub could have such a positive impact on your health.

But my friend, you are so, so, so mistaken!

When you read the literature on wheatgrass, the word “anti” comes up a lot, and in the best possible way.

It’s been used for medicinal purposes for thousands of years, and today is popular among the alternative medicine crowd as a way to prevent cancer and stop leukemia, among other things.

Wheatgrass is 70% chlorophyll, which is an insanely high amount, even for green foods.

The high amount of chlorophyll increases the level of oxygen in the blood, which is why wheatgrass is commonly associated with detoxification and cleansing diets.

It allows harmful toxins to flow out of the body, and its high phenolic content allows it to bind to “chelated” metal ions in the colon and liver.

Fresh wheatgrass also has a high amount of biologically active enzymes and amino acids which use are activated by a chemical called glutathione that catalyze the breakdown of various nasty things within the body. Glutathione dependent detoxification pathways are common to green foods, and it’s one of the many reasons veggies are so good for you.

Does Wheatgrass Have Gluten?

The presence of gluten is receiving an increasing amount of attention, and it’s now commonly known that gluten is found in wheat.

However, wheatgrass does not have any gluten in it. Gluten is a type of protein found in the endosperm of some flowering plants and forms as a byproduct of certain manufacturing processes. Wheatgrass (and all grass for that matter) does not contain any gluten in it.

For this reason wheatgrass is very “diet friendly”….no matter what diet you’re on.

It doesn’t matter if you’re vegan, paleo, pescatarian, gluten-free, etc. Wheatgrass has a place for you.

There’s been more attention paid lately to juice fasts and “detox” diets. They’ve been around for a long time, but received more attention after the movie Fat, Sick, and Nearly Dead came out. A guy with cancer cured himself by juicing a bunch of veggies for about a year or so.

Because wheatgrass is well known for its cleansing properties, its often used as a staple for such diet regimens.

Is it a good idea?

Yes. Cleansing diets are a unique animal, but because of its “greenness” using wheatgrass powder or wheatgrass juice is usually a good idea if you go on a juice fast.

It’s probably not necessary to eat wheatgrass all the time, but in my opinion it’s definitely a good idea to use some if you’re going to go on the 7 day juicing binge.

And while some don’t like the taste of wheatgrass, I actually find it refreshing. But of course, some have accused me of being weird 🙂

Making or Growing Your Own

You can buy lots of wheatgrass supplements, and that’s a fine idea. Wheatgrass powder and wheatgrass juice powder are nice additions to the diet.

However, it’s a well kept secret that growing and making your own wheatgrass is very easy and inexpensive.

Like I said before, it’s just grass. Of wheat…..and I mean, wheat is everywhere, right?

How do you make wheatgrass?

Juicing it is similarly simple. Adding it to any juice concoction is a fine idea, and there are no additional steps you have to take. Just juice it, baby!