What’s So Special About the Algae from Klamath Lake? 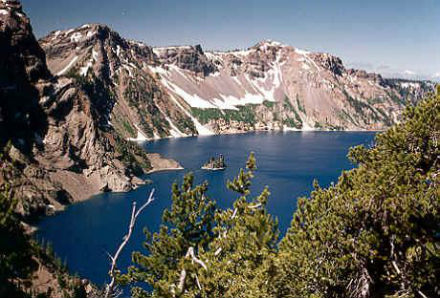 In the natural health world a lot of attention is given to a place called Klamath Lake.

Because it’s home to a particular type of blue green algae called Aphanizomenon flos-aquae, which is similar to spirulina and chlorella, but just a wee bit different.

Some folks claim that Klamath Lake blue-green algae has special health benefits, and because it only grows at Klamath, it’s worthy of special attention above and beyond other types of lake algae.

Well….kind of. To a degree.

Aphanizomenon flos-aquae is a type of cyano-bacteria that biologically is quite similar to spirulina. It’s actually toxic in most places where it’s grown, but Klamath Lake is remarkably pure and free of toxins, and so the blue-green algae there can be ingested by humans. And it grows there in heaps and tons.

100,000 thousand kilograms of blue-green algae is harvested from the lake every year for the supplement industry. During the summer the growth of algae is so robust that the lake turns green and most of the native fish die out because the algae sucks out all the oxygen from the water.

So we know Klamath Lake algae is unique, but does that make it better?

After all, caviar is really expensive…but that doesn’t mean people should go out and buy it.

The claims about it are numerous, but hard to verify. They include tumor suppression, immune system enhancement, and a possible plant source of vitamin B12.

Like other blue-green algaes, Klamath lake algae is a good source of protein, phytonutrients, and iron that has a high level of bio-availibility.

With regards to the health benefits of Klamath Lake Algae in particular, there are two remarkable points to consider:

Let’s go over both points.

Phycocyanin is a naturally occurring antioxidant that naturally forms in cyanobacteria. It reduces oxidative stress and inflammation in the body, and is one of the reasons spirulina is considered a “superfood.”

By weight spirulina is about 5% phycocyanin, whereas Klamath Lake Algae is about 15% by weight, and has an unusually high amount of bioavailibility.

That’s great, but there’s a good reason to curtail this benefit.

The truth is there’s not a whole lot of evidence one way or another about the benefits of Klamath Lake algae.

To see what I mean, go to this link: http://www.ncbi.nlm.nih.gov/pubmed?term=klamath%20algae

There’s a total of 4 studies on Klamath Lake algae. That’s not very much.

The ones that were conducted all show positive results, but in my opinion they’re not especially well done and not worth getting excited over.

Mostly studies where they give a small group of people a pill for a few weeks and then ask how they feel afterwards. Not exactly conclusive.

Another link that re-enforces my point can be found here: http://www.nlm.nih.gov/medlineplus/druginfo/natural/923.html

The NIH keeps a database of all foods, and rates the potential health benefits of each one as “likely” “possibly likely” etc.

It determined there wasn’t enough evidence to conclude anything.

So I’m fairly underwhelmed about this stuff.

Contrary to certain perceptions, algaes cannot reliably provide vitamin B12. They synthesize a metabolite of B12 that’s kinda-sorta like the real thing, but really doesn’t have the same effect in the body.

It’s believed by some raw-foodists that Klamath Lake algae is an exception has a biologically active form of B12, but I don’t believe this to be true.

The only evidence I can find of the Klamath Lake/B12 connection is this study…but that’s just one, and it’s far from conclusive.

You can frequently buy a powdered form of Klamath Lake Algae either by itself or as part of a superfood/greens powder.

In my opinion buying it separately is not necessary. Just buy spirulina powder or something similar that’s not as expensive.

As part of a superfood cocktail it’s a nice addition, but in my opinion is not necessary. It’s used in the mixtures of some of the better known brands like Boku and Vitamineral, but I wouldn’t think any less of a product that didn’t have it listed. Especially if it already has spirulina and chlorella.

23 thoughts on “The Truth About Klamath Lake Algae”