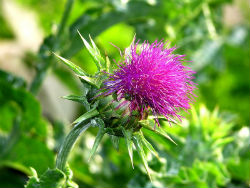 Does Mother Nature Have a Remedy for the Hangover?

Alcolohism has been with us for ages, and we’ve been figuring out ways to treat it way longer than we’ve had AA.

For centuries milk thistle has been used in home remedies to treat diseased livers of all varieties.  For the last twenty years different clinical trials have been conducted to contrast perception with reality.

Milk thistle seems to have a few components in it that act as superfoods for the liver to fuel its various metabolic functions.

And that’s not all it does for your body……

Milk Thistle’s health benefits to the liver are widespread. Various clinical trials have shown that it helps with the following ailments:

Milk Thistle also has powerful chemopreventive properties. It’s two active compounds silymarin and silibinin are powerful antioxidants that have been shown to have a remarkable ability to reverse cancererous cell growth in the following tissues:

Well, that’s because it is!

Sometimes folk tales are bunk and nothing but shallow mysticism. However, sometimes they contain a lot of wisdom because they’re the result of lots of trial and error experimentation.

I’d venture this is the case with Milk Thistle, since most of its publicized health benefits have more or less been clinically verified.

Milk Thistle and the Liver

As I stated before, Milk Thistle is perhaps the liver’s most potent super nutrient. It has a remarkable ability to aid in seemingly all of its vital functions, and so far no there have been no adverse side effects observed with continual consumption of Milk Thistle.

Hepatitis C is an infectious disease that’s the leading cause of liver induced morbidity in the world. Its traditional drug treatments are with the substances Ribavarin and interferon therapy, but these are expensive and often associated with a variety of nasty side effects.

Some of the evidence with Milk Thistle and hepatitis C is mixed, but there are a few ace clinical studies that have shown it improves almost all components of patient well being. One of the better examples is a randomized, placebo controlled study conducted in Iran that treated 100 patients with Milk Thistle extract for 6 months.

The patients had acute Hepatitis C, and the majority of the patients treated with the extract showed widespread subjective and measured metabolic improvements compared with the placebo group.

To varying degrees, Milk Thistle has shown to push back all of them. Even when  you hit the bottle hard.

After you get drunk your liver has to start working overtime to process the extra ethanol sitting in its chambers, and compounds like Glutathione (GSH), glutathione reductase (GSR), and glutathione peroxidase (GPx) are leftover as a result. These chemicals are all “free radicals” that start to scavenge the guts of your liver cells if they’re allowed to sit around long enough.

For reasons that aren’t entirely understood, Milk Thistle reduces the liver’s need to produce these chemicals when metabolizing alcohol, and allows the liver to leave more of the “good” compounds around like superoxide dismutase (SOD).

Keep that in mind the next time you get hammered. 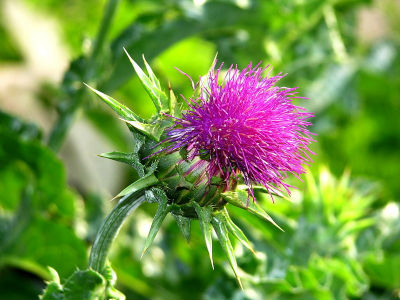 In addition to its superfood like effects on the liver, Milk Thistle can also halt the cell growth of a few different types of cancer.  Most notably:

The strongest evidence exists for prostate cancer, where the tumor suppressing effects of Milk Thistle appear to be fairly robust.

The evidence for the other three types is a bit more mixed.

How does Milk Thistle achieve these effects?

Milk thistle in general seems to be a metabolic laxative that smoothes over various rough edges in cell replication cycles that result from dietary abuse.

I’m not aware of any common recipes that contain Milk Thistle.  It’s not very flavorful, apparently.

So if you want to take some, you’ll probably have to take a supplement.

To be honest, I’m not sure of any differences in absorbance/availibility of the different forms of Milk Thistle.

Most of the studies I’ve read where milk thistle has had an observable impact involves taking an extract, so perhaps digesting it in liquid form is a plus. But this is entirely conjecture on my part.

El Kamary, Samer, et al. “A Randomized Controlled Trial to Assess the Safety and Efficacy of Silymarin on Symptoms, Signs and Biomarkers of Acute Hepatitis” Phytomedicine. May 2009. Pgs 391-400.

6 thoughts on “Milk Thistle: An Herb That Stops Cancer and Cures Hangovers!”