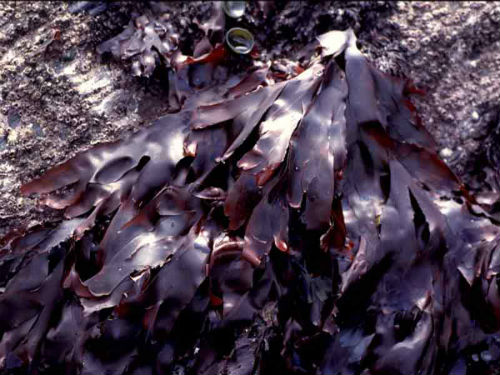 Nova Scotia Dulse is a red seaweed grown in the northern atlantic and pacific northwest. California, Nova Scotia, Spain, Ireland, and Maine are fertile areas where the plant is grown. It’s also called dulse for short, and its scientific name is Palmaria Palmata.

Edible seaweed has a long history of use in different Asian cultures. It’s easy to harvest and the plant has been around for thousands of years in its current form. There are records suggesting Japanese cultures began cultivating red seaweed as far back as 300 years ago. Edible seaweed like Dulse, kelp, and others gained attention from researchers in the 1990’s when it was discovered that many Asian populations that were notable for long lifespans and lack of chronic diseases used sea vegetables more frequently in their diet than westerners.

Dulse is particularly prevalent in arctic waters, and it’s believed it spread from the arctic circle into Ireland, Spain, and Novia Scotia about 20,000 years ago after the last ice age.

Overall, dulse and other sea vegetables are notable for their high mineral and protein content, particularly iron and potassium. At its highest levels of concentration Dulse has 34 times as much potassium as a banana. Not too shabby.

Dulse has an unusually high concentration of different minerals. One study found a total of 112 different minerals and trace elements in a collection of red seaweed from northern Spain. Minerals with the highest concentrations are copper, zinc, potassium, calcium, and magnesium. One study found that dulse had potassium concentrations 34 times higher than a banana. In fact, the potassium content was so high that it’s advised patients with renal conditions consult a doctor or dietician before using dulse in your diet.

A variety of studies suggest that edible seaweeds (including dulse) have strong anti-oxidative properties that prevent unhealthy cell proliferation. In Nova Scotia Dulse, these properties are believed to be caused by its high poly-phenol content. A study published in the Journal of Food Chemistry and Toxicology found that Palmaria Palmata (Nova Scotia Dulse) had the highest polyphenol content and the strongest inhibitory effects on cell proliferation in a group of red and green seaweeds. These properties have caused Nova Scotia Dulse and other seaweeds to be studied closely by cancer researchers and edible seaweed is increasingly being used as a “Functional Food” in anti-carcinogenic products.

The variability of nutritional value in dulse is very high. The location, season, and mineral content of the water it resides in has a large impact on its mineral and polyphenol profile. For example, a study conducted in the Journal of Nutritional Biochemistry found that the protein content in Dulse was twice as high in the winter than in the summer. Exposure to sun and UV rays can have a significant effect on the vitamin and mineral content in Dulse since sunlight can damage parts of the algal cell.

Dulse has a high protein content for a vegetable, but it’s not absorbed very well. In an unusual twist, protein absorption increases after manufacturing because absorption is inhibited by non-soluble fibers that bind to the protein in its natural state but are broken up when being processed.

Also, compared to other foods, the overall level of research on red seaweed in general and dulse in particular is small. More common ingredients like spinach, broccoli, and garlic have been studied much more extensively. Furthermore, there’s not a lot of research that analyzes the changes in nutritional value of dulse throughout the manufacturing process and how different brands, manufacturing processes, or growing conditions might affect the types of dulse you buy in food products.

So we have these experiments that show dulse helps slow down cell growth or promotes this condition in a laboratory setting, but there’s no consensus on how much of these benefits are kept when we take a dulse supplement, eat seaweed chips, or use other similar products.

The purported health benefits of Dulse more or less ring true. Its fatty acid, mineral, and polyphenol composition make it unique. For vegetarians especially its a remarkable source of different nutrients that are hard to find elsewhere, even in nutritional behemoths like spinach or broccoli.

Holzinger A, Lütz C, Karsten U, Wiencke C. The effect of ultraviolet radiation on ultrastructure and photosynthesis in the red macroalgae Palmaria palmata and Odonthalia dentata from Arctic waters. Plant Biol (Stuttg). 2004 Sep;6(5):568-77.

Marrion O, Schwertz A, Fleurence J, Guéant JL, Villaume C. Improvement of the digestibility of the proteins of the red alga Palmaria palmata by physical processes and fermentation.Nahrung. 2003 Oct;47(5):339-44.